Overview
Monarch larvae are specialist herbivores, consuming only host plants in the milkweed family (Asclepiadacea). They utilize most of the over 100 North American species (Woodson 1954) in this family, breeding over a broad geographical and temporal range that covers much of the United States and southern Canada. In a typical year, one generation is produced in the southern part of this range by returning migrants and two to three generations are produced in the northern part.

Monarchs and Milkweed
Milkweed provides monarchs with an effective chemical defense against many predators. Monarchs sequester cardenolides (also called cardiac glycosides) present in milkweed (Brower and Moffit 1974), rendering them poisonous to most vertebrates. However, many invertebrate predators, as well as some bacteria and viruses, may be unharmed by the toxins or able to overcome them. The extent to which milkweed protects monarchs from non-vertebrate predators is not completely understood, but a recent finding that wasps are less likely to prey on monarchs consuming milkweed with high levels of cardenolides suggests that this defense is at least somewhat effective against invertebrate predators (Rayor 2004).

Benefits gained by monarchs from cardenolides are not without cost. Milkweed plants vary greatly in cardenolide concentration, both individually and between species. Both the toxin and the sticky latex produced by the plants provide defenses against herbivores. Monarchs appear to be negatively affected by consuming plants with high cardenolide levels, and may actually starve to death when their mandibles are glued together by the latex or if their bodies become mired in a drop of latex formed when the plant is injured (Zalucki and Brower 1992; Malcolm and Zalucki 1996; Zalucki and Malcolm 1999; Zalucki et al. 2001). Larger larvae reduce this risk by chewing a notch at the base of the milkweed leaf midvein, cutting off the flow of sticky latex to the rest of the leaf and allowing more efficient eating (see Figure 1). 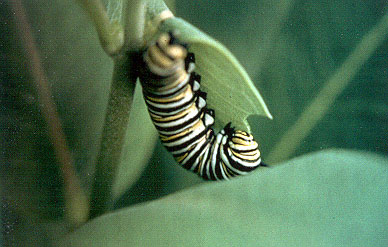 Like other plants, milkweed quality as a host for insects varies. Many insects are nitrogen limited (McNeil and Southwood 1978, Mattson 1980, Scriber 1984, Slansky and Scriber 1985, White 1993). They must consume large quantities of their host plants to accumulate enough nitrogen for growth and development, since animal tissue generally consists of 7-14% nitrogen by dry weight (dw) and plants consist of 0.03-7.0% nitrogen dw (Mattson 1980). Leaf nitrogen levels vary within a season, as plant tissue ages and as plants allocate more resources to reproductive tissue. In addition, plants grow in habitats with different levels of available soil nitrogen. Lavoie and Oberhauser (2004) studied the response of monarch larvae to plants manipulated through fertilizer treatments to contain varying leaf nitrogen levels, and found that they compensated for low nitrogen leaves by consuming more plant tissue per day. If increased consumption makes them more vulnerable to predation or plant defenses, this could result in decreased fitness levels. 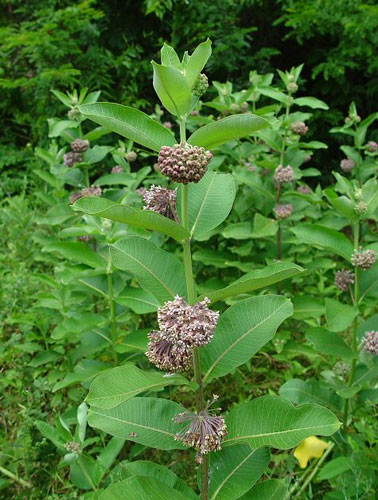 The most important northern host plant is Asclepias syriaca (common milkweed - Figure 2), but a number of other species are used as well, such as A. incarnata (swamp milkweed - Figure 3). Central Plains host plants include the vine Cynanchum laeve (sand or honey vine). A northeastern invasive plant in the same genus (C. nigrum) has spread west as far as Wisconsin. This species is attractive to ovipositing females, but monarch larvae do not survive on it (Haribal 1998). In the south, the most important host plants are probably Asclepias oenotheroides (zizotes milkweed), A. viridis (spider milkweed) and A. asperula (antelope horn milkweed), all fairly common throughout Texas and other southern US states.

Egg production
It is difficult to tell just how many eggs female butterflies lay during their lives, but the average in the wild is probably 300 to 400. Captive monarch butterflies average about 700 eggs per female over 2 to 5 weeks of egg laying, with a record of 1179 eggs (Oberhauser 1997). 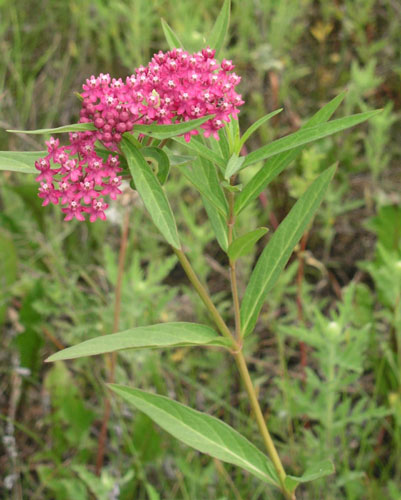 Monarch eggs hatch about 4 days after they are laid, but the rate of development in this stage, like all other stages, is temperature dependent, with individuals in warmer environments developing more rapidly (Zalucki 1982). The proteins that are an important constituent of eggs must either be derived from nutrients ingested during the larval stage or obtained from males during mating (Boggs and Gilbert 1979, Oberhauser 1997). While an individual monarch egg (Figure 4) weighs only about 0.460 mg, about 1/1000 the adult mass, females often lay more than their own mass in eggs throughout their lives.

Monarch eggs and larvae have a slim chance of reaching adulthood; several studies have documented mortality rates of over 90% during the egg and larva stages (Borkin 1982, Zalucki and Kitching 1982, Oberhauser et al. 2001, Prysby and Oberhauser 2004). This mortality stems from both biotic and abiotic sources. Biotic factors that affect monarch survival include natural enemies such as predation, diseases and parasites and interactions with their milkweed hosts. Abiotic factors include environmental conditions such as adverse weather and pesticides. 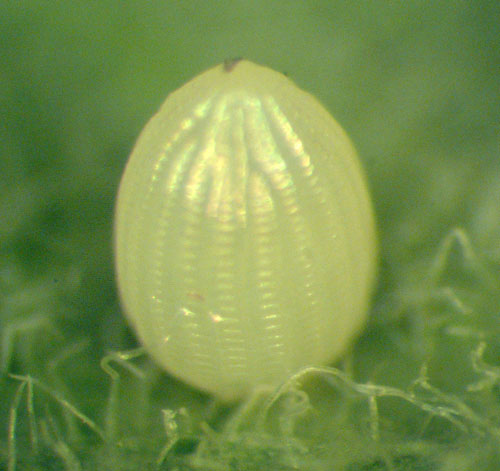 Many monarchs in natural populations are killed by invertebrate predators that eat the monarchs themselves, or by parasitoids whose larvae develop in and eventually kill the monarch larvae. Diseases caused by bacteria, viruses, fungi and other organisms are also significant sources of monarch mortality.

Prysby (2004) documented overall impacts of natural enemies on monarch survival. By limiting predator access to monarch eggs and larvae with exclosures placed around naturally growing milkweed plants, she showed that both terrestrial and aerial predators represent significant sources of mortality (Figure 7). In addition, she found that monarch eggs were less likely to survive on plants on which ants had been observed, suggesting that ants are important predators. 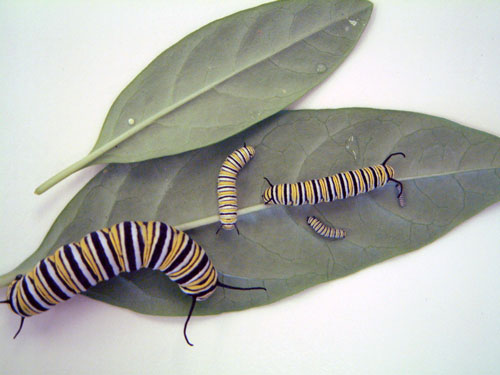 This conclusion is supported by work in Texas by Calvert (1996, 2004), who found that monarchs inside exclosures were much more likely to survive than those outside the structures. Calvert found that invasive fire ants currently kill most of the monarch eggs and larvae present in many areas in Texas, but thinks that pre-fire ant mortality may have been similarly high, since these invasive ants displaced native ants that also preyed on monarchs. In addition to predators, insect parasitoids are important sources of monarch mortality in some locations. Prybsy (2004) and the Monarch Larva Monitoring Project have both documented mortality rates of 10% to 90% in late instar monarchs due to tachinid fly (family Tachinidae) parasitoids, but these rates are variable from location to location and year to year. 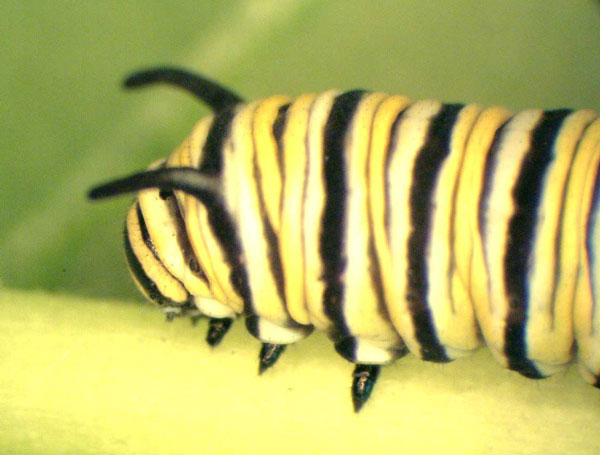 Monarch eggs do not hatch in very dry conditions (Dunlap et al. 2000), and dry weather can kill milkweed. Very hot weather also causes mortality; several studies have shown that temperatures above approximately 35oC (95oF) can be lethal to all stages (Zalucki 1982, Malcolm et al. 1987, York and Oberhauser 2002). Likewise, extended periods in which temperatures are below freezing can kill monarchs, although this has been best studied in overwintering adults (Anderson and Brower 1993, 1996; Brower et al. 2004). Threats due to very hot or very cold temperatures are magnified during the breeding season, since monarchs are indirectly affected by conditions that affect milkweed health and survival. Freezing temperatures and extremely dry conditions are especially damaging to milkweed, and thus to monarchs. 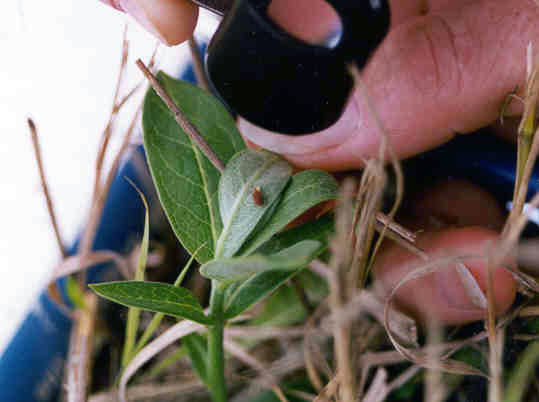 Pupae
During the pupa stage the transformation to the adult stage is completed in a process that takes about 9 to 15 days under normal summer temperatures. The ecology of monarch (or any other lepidopteran) pupae is unfortunately poorly-studied, at least partially due to the fact that it is extremely difficult to find monarch pupae in the wild. Their green color provides effective camouflage in a green world, and they appear to seek sheltered spots to undergo this transformation. Important questions on how larvae choose sites for pupation, how far they travel seeking these sites, what habitat characteristics are important in promoting pupal survival, and how much mortality from different sources occurs during this stage remain to be investigated.

Adults (Figure 8)
Non-migratory adults live from two to five weeks, while those that migrate may live up to nine months. This difference is due to the fact that overwintering monarchs are not reproductive, and can thus funnel more energy into survival. In addition, the cool conditions in the overwintering sites slow their metabolism. 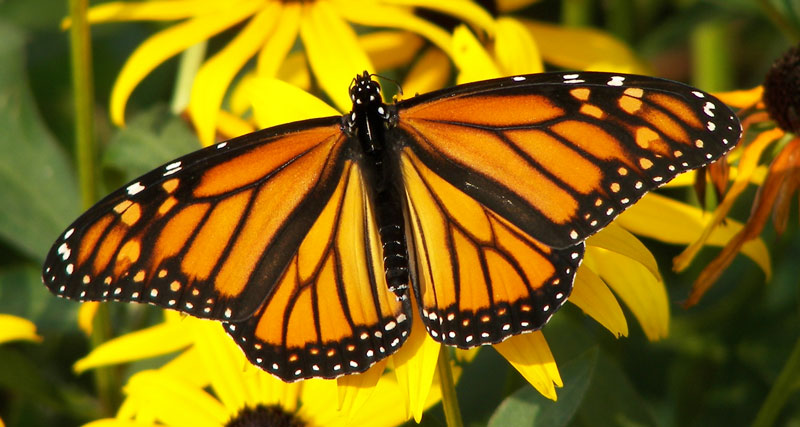 Summer generation monarchs first mate when they are 3 to 8 days old (Figure 10) (Oberhauser and Hampton 1995), and females begin laying eggs immediately after their first mating. Monarchs that overwinter do not lay eggs until spring (although they may mate before this). Both sexes can mate several times during their lives (e.g., Oberhauser 1989), and the ability of male monarchs to force unwilling females to copulate makes them unique among the Lepidoptera (Oberhauser 1989; Van Hook 1993; Frey et al. 1998). When females mate with more than one male, it is generally the last male that fertilizes their eggs (Solensky 2003, Oberhauser personal observation).

Since there is a delay between adult emergence and egg-laying, and also because monarchs reproduce over a relatively long time period, maximizing reproductive success also requires being able to survive predators, environmental extremes and other sources of mortality. Adult survival during the breeding season is another under-studied area of monarch biology, despite its importance to monarch ecology. Full understanding of adult ecology during the breeding stage of their lives will require measuring the effects of nectar availability and quality, the distances that females will fly to find milkweed host plants, the degree to which breeding monarchs remain in one area or move, and the effects of abiotic conditions on adult survival (Oberhauser 2004). 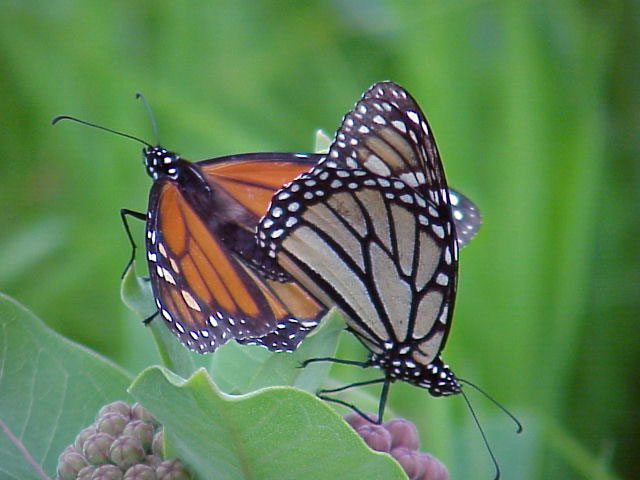 Human-induced mortality during the breeding season. As with many other species, the most important source of human-caused mortality for monarchs is habitat loss, especially the destruction of milkweed and nectar sources. Milkweed is considered a noxious weed in some localities, and is often destroyed. In addition, herbicides used to kill plants in agricultural fields, near roadsides, and in gardens may harm milkweed and nectar sources, and may also kill monarchs directly. This has probably become much more important in agricultural fields with the widespread adoption of herbicide-tolerant crops. In a study conducted in the summer of 2000, Oberhauser et al. (2001) found that most monarchs probably originated in agricultural habitats. Since that study, however, most soybeans grown in the upper Midwestern US are now herbicide-tolerant (Wassenar and Hobson 1998). This is especially concerning because this area is the source of most overwintering monarchs, and the increased use of herbicides as a result of increased tolerance means that fields have many fewer milkweeds than before (Oberhauser unpublished). Monarchs can also be exposed to insecticides used to control insect pests in agricultural fields, forests, and gardens. Many people worry that the use of insecticides to combat mosquito-borne diseases like the West Nile Virus will kill monarchs and other beneficial insects.

The risks to monarchs of corn genetically modified to contain Bt (Bacillus thuringiensis) toxin have received a great deal of attention (Losey et al. 1999; Jesse and Obrycki 2000; Oberhauser et al 2001; Sears et al. 2001; Brower 2001). Bt corn produces a protein that is toxic to lepidopteran larvae, and is effective against European corn borers, important agricultural pests. However, the wind-dispersed pollen produced by Bt corn also carries the toxin. The toxicity of the pollen produced by different corn varieties varies significantly, and the varieties now on the market have lower levels of toxin than some of the earlier varieties (Hellmich et al. 2001; Sears et al. 2001). Most researchers who have assessed the risks of this technology isolated corn pollen from other material shed by the plant (particularly the pollen-bearing anthers) (Hellmich et al. 2001; Sears et al. 2001), but Jesse and Obrycki (2004) found a consistent trend of lower survival in Bt fields than non-Bt fields when larvae were exposed to Bt corn pollen and anthers naturally deposited on milkweed plants within a corn field. This finding suggests that the blanket conclusion that Bt corn poses no risks to monarchs (Sears et al. 2001) should be revisited.