Overview
Unlike most temperate insects, monarch butterflies cannot survive extended periods of freezing temperatures, so North American monarchs fly south to spend the winter at roosting sites. In the spring, these overwintering monarchs fly north toward their breeding range. The monarch is the only butterfly to make such a long, two-way migration, flying up to 4830 kilometers in the fall to reach its winter destination (Urquhart and Urquhart 1978). Monarchs east of the Rocky Mountains generally fly to overwintering sites in the mountains of central Mexico, while monarchs west of the Rocky Mountains typically overwinter along the California coast, although recent observations by Pyle (1999) suggest that some western monarchs move south and southeast out of the inland northwest and Great Basin, entering Mexico from Arizona. The magnitude and destination of this movement is not understood. Another unanswered question about the western North American monarch population is the degree to which it is truly migratory, or whether it undergoes an annual range expansion and contraction in California. Wenner and Harris (1993) suggest that many monarchs are year-round residents of California whose offspring are able to spread to surrounding states during the mild summer weather but are forced to return to California or perish when the inhospitable northern winters return. This issue is still being debated.

Stable isotope studies (Wassenaar and Hobson 1998) and recoveries of tagged butterflies (Urquhart and Urquhart 1978, Monarch Watch 2004 and OR Taylor personal communication) suggest that the majority of monarchs that migrate to Mexico originate in the Midwest. However, these studies also show that the overwintering populations are comprised of monarchs coming from a wide geographic area that covers much of the range shown in Figure 11 (below). Unfortunately, similar studies revealing the origins of monarchs overwintering in California have not been conducted. 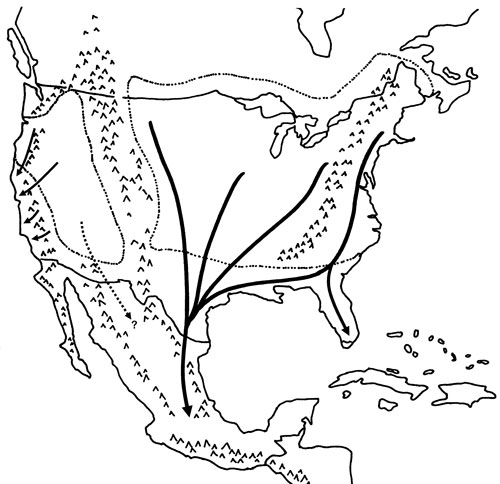 Australian monarchs also exhibit seasonal movement, moving from inland to coastal areas in a north to northeasterly direction during the fall and winter (James 1993). However, because the most spectacular monarch migrations (in terms of distance and numbers of migrants) occur in the eastern North American population, much of the research on monarch migration has focused on this population. These insects, weighing about half a gram, fly from their summer breeding range that covers more than 100 million ha, to winter roosts that cover less than 20 ha. Since the discovery of these winter roosts in Mexico by the scientific community in 1975 (Urquhart 1976), researchers have struggled to understand the cues that cause monarchs to begin their migration, the mechanisms they use to orient and find the overwintering sites and the patterns of fall and spring flight.

Initiation of migration
While non-migratory monarchs become reproductive within a few days of eclosion, late summer and early fall monarchs emerge in reproductive diapause, a state of suspended reproductive development. Diapause is controlled by neural and hormonal changes (Barker and Herman 1976, Herman 1981) triggered by environmental factors that signal the onset of unfavorable conditions, in this case winter. Goehring and Oberhauser (2002) found that decreasing daylength, fluctuating temperatures and senescing host plants each caused an increase in the proportion of monarchs that emerged in reproductive diapause, but the strongest response occurred among monarchs exposed to all three cues. Making use of more than one cue to assess current and near future habitat suitability could be a more optimal strategy for organisms in unpredictable environments.

Perez and Taylor (2004) tested the common assumption that reproductive diapause and migratory behavior in monarchs are coupled by exposing fall migrants to summer daylengths and temperatures. These butterflies exhibited reproductive behavior, but continued to show migratory flight directionality. They argue that while reproductive diapause can be readily reversed in fall migrants, migratory behavior is resistant to changes in environmental conditions. This finding is supported by Borland et al. (2004) and data from the Monarch Larva Monitoring Project (2004); many monarchs appear to become reproductive when they reach the southern US during their fall migration. The importance of this late reproduction to overall monarch population dynamics, and the environmental triggers that promote it, is still undetermined, but it suggests that an increase in the availability of milkweed in gardens and parks may trigger reproduction (Goehring and Oberhauser 2004).

Orientation and migration pathways
Insect orientation in general is poorly understood, and monarchs are no exception. The ability of monarchs that are spread over 100 million ha to converge in a very small area in the mountains of central Mexico is mind-boggling, and may be one of the most compelling mysteries of animal ecology. Other animals use celestial cues (the sun, moon, or stars), the earth’s magnetic field, landmarks (mountain ranges or bodies of water), polarized light, infra-red energy perception, or some combination of these cues to migrate, but the degree to which these cues are used by monarchs is not known. Calvert and Wagner (1999) proposed that mountain ranges and river valleys might be used by monarchs to orient during their migration, but celestial cues and the earth’s magnetic field have been studied the most.

Many researchers agree that the sun is the celestial cue most likely to be used by southward migrating monarchs. Kanz (1977) and Schmidt-Koenig (1985, 1993) suggested that monarchs use the angle of the sun along the horizon in combination with an internal body clock to maintain a southwesterly flight path, and Mouritsen and Frost (2002) confirmed this hypothesis. Because monarchs often migrate on cloudy days, this sun compass must be combined with the use of some other cue. Scientists have suggested that monarchs may use a magnetic compass to orient, as has been demonstrated in some migratory birds (Wiltschko and Wiltschko 1972, Emlen et al. 1976). However, Mouritsen and Frost (2002) showed that migratory monarchs exhibited randomly oriented flight when presented with only magnetic field cues and did not respond to magnetic field shifts, suggesting that monarchs do not use the earth’s magnetic field to orient during migration. They propose that monarchs may use polarized light patterns, which penetrate cloud cover, to orient on cloudy days.

The first large-scale study of the fall monarch migration began in 1937 when Dr. Fred Urquhart recruited volunteers for his insect migration study, which involved putting small paper tags on the leading edge of the monarch forewing and obtaining both release and capture locations for tagged butterflies (Urquhart and Urquhart 1977). In the fall of 1992, a new tagging program was established (Monarch Watch 2001) to continue the study of fall migratory routes. These tagging programs have revealed much information about the patterns and timing of the fall monarch migration. Several studies have shown that monarchs generally migrate in a south to southwest direction (Gibo 1986; Schmidt-Koenig 1985), with a shift from south to southwest as the origin of flight moves from west to east (Rogg et al. 1999). More recently, Wassenaar and Hobson (1998) used stable isotopes to estimate the origin of monarchs overwintering in central Mexico. They found that about half of the monarchs collected from 13 overwintering sites had migrated from the midwestern US, with smaller numbers originating from the northeastern US and Canada. While tagging reveals patterns of individual fall migrants, stable isotope studies show promise for revealing population-level migratory patterns.

Behavior during migration
Like migratory birds, monarchs make frequent stops during migration, forming roosts at night and during inclement weather that range in size from a few dozen to a few thousand individuals. Little is known about this roosting phenomenon, but recently Davis and Garland (2004) used methods from ornithological studies to investigate factors influencing monarch stopover decisions. They found that monarchs commonly stayed at roosting sites for at least 2 days, and proposed that levels of energy reserves may influence monarch migration and stopover decisions, with monarchs staying longer at stopover sites when their lipid reserves are small. Both Borland et al. (2004) and Gibo and McCurdy (1993) found that monarchs collected in the south were heavier than those captured in the north, suggesting that nectaring along the migratory path results in weight gain and increased energy reserve (Figure 12). These findings support the suggestion that energy reserves may influence monarch migration decisions. While orientation mechanisms have gained much attention from researchers, few studies have addressed stopover ecology or characteristics of monarchs that increase migratory success.